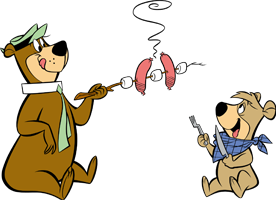 To quote the great Yogi Bear, the only cartoon character to ever play professional baseball:

“It’s hard to make predictions, especially about the future.”

I, DRAGONE, with my overdeveloped intuition and my underdeveloped sense of shame, shall be attempting to do just this.  Make predictions about none other than the future, despite the fact that “the future ain’t what it used to be.”  Only time will tell whether or not I will be correct.

My first installment of “2016 Predictions” is dedicated to the great 20th Century rockers Guns N’ Roses who have announced that they plan to reunite in April of this year to headline at a major festival.

DRAGONE critiques news, entertainment, sports, fashion, and love. He also has ADD, but that is irrelevant.
View all posts by DRAGONE →
This entry was posted in Humor and tagged comedy, entertainment, funny, humor, humour, music, parody, predictions, satire. Bookmark the permalink.