Isn’t “über” the best word ever?  As in, “that was one über gnarly wave, dude”.  Or, “Hey Grandma, those tea biscuits were über delicious. They’re what I’ve been dreaming about all week.”

Almost as amazing as the word über is the umlaut it contains.  It’s like a pair of beady little eyes looking back at me.  A soft pair of beady little eyes, admiring me, letting me know what a smart and attractive profile I have when I turn 45 degrees to the left.  Not like a double quotation mark which to some may look like a pair of flirting, winking eyes, but not to me.  No, I don’t trust those scheming quotations one bit.

Umlauts are direct. They don’t lie. Their gaze is hypnotic.  I think I’m falling in love with the umlauts on my laptop screen right now.  All of them.  I can’t choose between them.  They are all so equally beautiful.

Whoa!  Sorry about that.

The taxi cabs in my city, the City of Toronto, are planning a huge protest this weekend in order to disrupt the NBA All-Star Game.  Well not the taxi cabs really, the drivers.  They’re pissed that they’re not as good as Uber taxis.  Of course, they might phrase it differently than that. 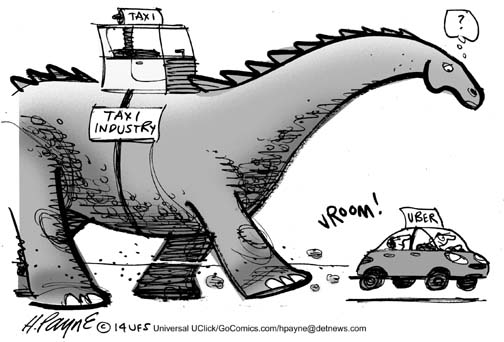 The thing is, Uber is such a great idea that it’s here to stay.  Uber is the way of the future.  The key to folding this new ingredient into the taxi industry is deregulation.  I mean, who needs these annoying and unnecessary old fashioned rules which for decades have governed how you are allowed to travel?  Bureaucratic licensing that certifies a driver as safe and competent?  Instead, put the trust in us, the people.  Ordinary people have the inane ability to weed out drivers who may be potential criminals and perverts, with our very own instincts.  So take that, taxi industry, and let’s see you try and certify my natural instincts!

But why stop at Uber taxi cabs?  I have some great ideas of how to expand the Uber concept to other industries.

Uber dinner leftovers.  Imagine you are hungry, but do not want the usual take-out.  Instead, you look up the leftovers from average citizens online and choose from an assortment of lasagna, meatloaf, mama’s chicken soup, and so on.  And who needs regulation?  Expensive and annoying health inspections?  We, the average citizen, can sniff out bad meat all on our own.  How else did our ancestors survive eating saber tooth tigers?

Uber physicians.  Undergraduate university, followed by 4 years of med school, followed by more years of specialization, and sub-specialization.  Are you kidding me?  So now, at the age of 40, a rookie physician can start his or her medical career.  Well this system may have seemed logical to pre-Google societies, but it is now outdated.  I don’t know about you, but my doctor’s name is Google and he’s available 24/7.  He’s pretty cheap too.  Now I will admit that sometimes Google does not get the subtle nuances of my aches and pains perfectly, and an actual human being with some experience in aches and pains may be beneficial.  Enter the Uber physician – an elderly person most likely working out of their retirement home.  The elderly have accumulated a wealth of experience in aches and pains and whereas they may not be in any condition to make a house call, you could certainly visit them.  Another problem solved.  You’re welcome.

Uber sperm donors.  You, an infertile couple, sit at home every night watching reruns of 1980s comedy sitcoms.  Or your man just can’t get it up (and out).  And who can afford these ridiculously expensive and highly regulated artificial semen collection agencies? How insulting to think that my sperm needs regulation. Voila, Uber sperm donors!  You look up online who has some fresh samples available and you hire an Uber taxi to go and get some.  And while you’re at it, why not stop along the way for some Uber dinner leftovers?

DRAGONE critiques news, entertainment, sports, fashion, and love. He also has ADD, but that is irrelevant.
View all posts by DRAGONE →
This entry was posted in Humor and tagged business, Canada, humor, humour, ideas, innovations, satire, taxi, Toronto, Uber, words. Bookmark the permalink.

1 Response to My UBER Ideas