I have been busy, my friends.  Busy looking up quotes on ambition.

The only way to soar to great heights is to fly overtop very deep valleys.  Carving out those deep valleys in the pit of his stomach may be a painful task, but it is a necessary task in order to summon up the courage to say, in a whimpering voice, “Dream big or die”.  Fortunately, as my living pulse can attest to, DRAGONE has always chosen to dream big rather than to die.

And that brings us to ambition.  Having this kind of shotgun wedding relationship to ambition brings out the best in DRAGONE.  Ambition born from a man’s gut.  But just to make sure that he gets it right, DRAGONE has been busy looking up quotes on ambition.

Intelligence without ambition is a bird without wings. – Salvador Dali

Basically you have to suppress your own ambitions in order to be who you need to be.  – Bob Dylan

Ambition is a poor excuse for not having sense enough to be lazy. – Milan Kundera

Never let experience get in the way of ambition. – Author Unknown

The scene this past Saturday night that set the stage:  Gorging on hot bean burritos while watching the NBA Slam Dunk competition.  Salvador Dali once again:  “Intelligence without ambition is a bird without wings”.  I like to think of myself as being a genius in the emotional intelligence department.  Salvador Dali intersection with DRAGONE:  “Emotion without ambition is a dead frog without legs to fly with”. 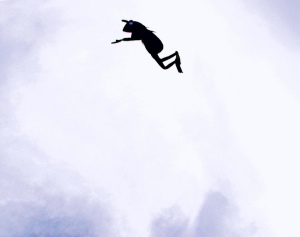 You see, back in the day my high school science club friends and I came up with a brilliant idea for a competition.  Our biology teacher was going to dispose of all the dead frogs that were used for dissection.  Why throw out perfectly good dead frogs, we asked.  Especially when you can position them upright with their slimy legs tucked and spring loaded into their little bodies, all ready for an electric shock to the thighs which resulted in violent muscle spasms.  Which in turn resulted in flying dead frogs.  So why throw out perfectly good dead frogs, we asked, when you can instead have a flying dead frog competition? 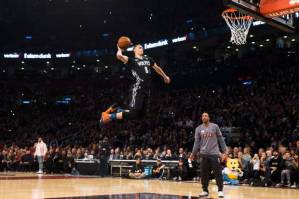 And then I saw Zach LaVine flying through the air like a dead frog zapped in the thighs.

My ambition, ladies and gentlemen, is to successfully slam dunk a basketball before next year’s NBA Slam Dunk completion.  I’m not insane.  I’m not saying that I’ll take off from the free-throw line, or leap over a furry green mascot, or do anything wild and crazy like that.  Just a jump and a slam dunk.

Now I ask you, is that too tall a task for a 5’7” DRAGONE?  (5’8” when the spine is jolted upright due to surprise.)  I have already started my squats and calf raise training regimen.

Emotion marries ambition in a shotgun wedding.  The bride is beautiful.  The groom is nervous.

DRAGONE critiques news, entertainment, sports, fashion, and love. He also has ADD, but that is irrelevant.
View all posts by DRAGONE →
This entry was posted in Humor and tagged basketball, blog, comedy, funny, humor, humour, NBA, satire, writing. Bookmark the permalink.