What is a fake stare you ask?  It’s when you’re confused and have no idea how to react to a situation, so you just stand there.  You fake a stare.  You pretend like you know what’s going on and you’re not going to give in.  Give in to what?  You don’t know.  You have no idea.  You’re paralyzed.  You can’t blink.  You’re faking a stare.  But no one else knows you’re faking.

And this is how I’ve stared down celebrities and sent them to their ruins.

Ben Johnson, the cheater.  The steroid abusing Canadian sprinter who got caught twice.  “I Cheetah” he says on a commercial.  He had no idea what he was saying.  The Cheetah fat cats must have busted their guts laughing so hard.  Anyways, sometime in between the two times that he got caught running on steroids, he walks up to the back door of the gym where I was working out.  He calls me over.  Then he stutters.  Oh man, does he stutter.  I can’t understand a thing he is saying.  I suppose he is asking for someone who’s got a stash of steroids for him.  But I don’t know what to do, because I can’t understand a thing he is saying.  And by this time, I recognize him.  I STARE HIM DOWN.  He walks away in frustration, and screeches off in his sports car.  Even his car was on steroids.

John McEnroe, the whiner.  The spoiled little brat of a tennis player with zero muscle tone who had no business being a professional athlete.  He reminds me of a rich little kid at summer camp who demands an ice cream from the tuck shop after its already closed.  I was watching him play tennis when he was still a pro, but on the way down.  My seats in the bleachers sucked, so I walked down to the aisle that was in between sections, and just stood there.  John McEnroe was serving.  He looked up at me, then looked at the ref (or whatever they’re called in tennis).  The ref makes an announcement for everyone to take their seats.  But that was just a general announcement.  No one said anything to me.  So I just stood there.  John McEnroe looks up at me, then back at the ref, then back up at me.  I STARE HIM DOWN.  He loses his match and retires later that year. 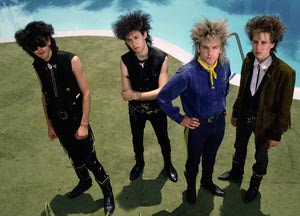 The lead singer for some 80s band, the loser.  I don’t even remember his name, or the name of his band.  But I remember that he was famous.  Kind of.  His music was the run of the mill, formulaic type of rock that is, well, unmemorable.   He was old and on his way out, playing at a small outdoor venue.  It was cold.  I was sitting down, drinking my beer, frozen to the bone.  I unzip my jacket, spread my arms and legs out, and lean back.  I refuse to shiver.  I’m saying “Fuck you” to the cold.  Meanwhile the singer is jumping up and down trying to elicit a response from the crowd.  I look at him.  He looks at me.  I refuse to move, I’m too cold.  I STARE HIM DOWN.  And the 80s band was never heard from, or remembered, again.

3 Responses to Celebrities I’ve Stared Down