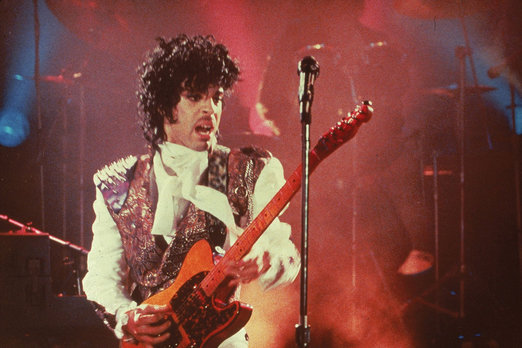 I grew up listening to heavy metal, with AC/DC as the standard.  There were brief moments of awesomeness from Iron Maiden, Judas Priest, and the odd Van Halen song.  But AC/DC delivered, song after song, album after album.  Of course, AD/DC isn’t called heavy metal anymore.  It no longer stands for badass rocker.  Its mainstream now.  But back in the day it was not.

Back in that same day Prince was on MuchMusic (that’s Canadian for MTV) drooping naked in a bathtub and whining about crying doves.  Yet I was compelled to watch that video.  There was no one I would ever admit that to, but Prince was badass in a different way.  I resonated with his intensity, respected his authenticity, and was intrigued by his artistic ways.  No one I knew would ever understand, so I kept my Prince secret to myself.

Now a funny thing happened to me at work a couple of months ago.  We were talking about music during lunch and Prince came up.  I laughed about how I secretly liked his music.  The English teacher stopped in bewilderment, looked at me, and said that I don’t have to be secretive about it.  His music is great, so why shouldn’t I like it?  Ironically he went to the same high school that I did, only a few years later.  But he wouldn’t understand.  He grew up listening to New Wave.

This English teacher had a cool story to share about Prince.  According to a friend of his (this story is now third-hand, but I’ll try to believe it!) he witnessed Prince practicing, with some other musicians, a new song that he wrote.  Prince got frustrated with the piano player who couldn’t play the crazy notes that he wrote.  The piano player was complaining about how ridiculous the chords were, and that it was impossible to play.  So Prince leaned over the back of the piano, facing the piano player, and played those crazy chords with his hands backwards to the piano.  Apparently Prince could play about 30 different instruments.

I still love my AC/DC.  Their chords are simple, but full of power.  I love how they belt out those songs about rock and roll.  They love rock, and they love singing about how much they love rock.  I can’t get enough of it.  Even a bagpipe sounds awesome when it’s in an AC/DC song.  But Prince with his own badass attitude is awesome too.

I also have an Abba secret, and an Eminem secret.  But one secret confession at a time.  Baby steps.

DRAGONE critiques news, entertainment, sports, fashion, and love. He also has ADD, but that is irrelevant.
View all posts by DRAGONE →
This entry was posted in Humor and tagged ACDC, blog, confession, entertainment, life, music, personal, Prince, rock, secret, tribute. Bookmark the permalink.

2 Responses to My Prince Secret